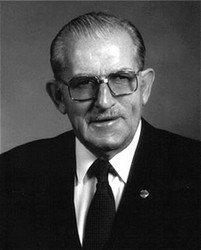 Dr. Ralph Gregory was a visionary and gifted healer whose lifetime work was the relationship between the upper cervical spine (neck) and its profound influence on the central nervous system and brain stem function. He developed a healing technique now known as NUCCA that stands for the National Upper Cervical Chiropractic Association. The circumstances and events that led to the establishment of NUCCA are described as follows.

In 1941, Dr. John Francis Grostic received an atlas adjustment from Dr. Gregory which forged the beginning a close friendship and the evolution of the NUCCA upper cervical procedure. As a victim of Hodgkin’s disease, Dr. Grostic had been unable to obtain a corrective atlas adjustment prior to his visit to Dr. Gregory other than at the B. J. Palmer Chiropractic Clinic in Davenport, Iowa. While both doctors had practiced full spine adjusting, their primary interest was the upper cervical spine. It was only natural, therefore, that they should collaborate, making every possible attempt to evolve a more biomechanically accurate system of upper cervical subluxation correction. To achieve this end, the installation of precisely aligned x-ray equipment and patient placement became essential, permitting distortion free x-rays to be taken and making x-ray analysis with rotatory measurement acceptable.

Dr. Gregory had been influenced by Dr. A. A. Wernsing’s The Atlas Specific and was greatly impressed by Wernsing’s comment: “…due to the shape of the superior articular facets of the atlas, the atlas moves laterally as if on the rim of circle”. From there, Drs. Grostic and Gregory added the axis superior articulations, and as a result, the condylar-axial concept became the starting point for what was to become the Grostic Technique. In early 1943, Dr. Grostic, who was not satisfied with existing methods of determining atlas laterality, developed the prototype of the instrument which was to become the cephalometer, a skull-divider for establishing the central skull line. When joined to the atlas plane line, these two lines formed two angles with atlas laterality being on the side of the acute angle. This system of establishing atlas laterality was checked for months by both Grostic and Gregory. It was found to be consistent and remains so today. Rapidly following this work were the concepts of atlas-odontoid relationship, axis-spinous position, the lower angle, the method for determining atlas rotation, the discontinuance of the recoil for the triceps pull adjustment, and the horizontal resultant. Analytical instruments were perfected, adjusting tables modified, and adjustment coordinators developed. While this work between 1941 and 1946 hardly deserved the appellation “research”, it did provide a biomechanical basis for the further evolution of upper cervical study though a mostly trial and error procedure.

By this time, several chiropractors had received personal benefit from the work and requested a seminar. As a result, in the fall of 1946, the first Grostic seminar was held in Ann Arbor, Michigan, limited to eighteen participants. From that time forward, seminars were held annually. Immediately following the death of Dr. Grostic in 1964, Dr. Gregory did not wish to continue teaching seminars, but concentrated on advancing the basic work. In early 1966, however, he was contacted by Dr. L. H. McLellan of Mesa, Arizona who requested that Dr. Gregory conduct seminars for several chiropractors because of his close affiliation with Dr. Grostic. Dr. Gregory finally agreed and held the first seminar in 1966 at the Howard Johnson Motel in Monroe, Michigan. By 1978 the seminars were approved for license renewal by the Michigan State Board of Examiners. Dr. Gregory believed that in view of the recent split among Grostic practitioners, an organization should be started to conduct future seminars and research. He consulted with Mr. Donald A. Miller, a Detroit attorney and former friend and legal adviser to Dr. Grostic, who, with other interested chiropractors, formed The National Upper Cervical Chiropractic Association, Inc. (NUCCA), a fraternal organization, on April 16, 1966. Elected first President was Dr. Irvin Mathias of Indiana; Vice-President, Dr. Albert Dick of Michigan; Secretary, Dr. Robert Kemp of Michigan; Treasurer, Dr. Marshall Dickholtz of Illinois, and three NUCCA directors: Drs. Max Foster and Ralph R. Gregory of Michigan and Andrew Mathias of Indiana. The newly elected board adopted the NUCCA emblem and authorized an official organ, NUCCA News, of which Dr. Gregory was appointed editor.

The first publication was issued in December of 1966. Harry Long, Ph.D. was appointed the first research advisor in 1967. As ever-increasing clinical observations arose, hypotheses were formulated that required testing. Research expanded, re-examination of the original basic work had to be facilitated, and newer methods of subluxation analysis and correction developed. To accomplish this task, the NUCCA board was advised that a research organization needed to be established because NUCCA was a fraternal organization and could not conduct research. The National Upper Cervical Chiropractic Research Association (NUCCRA) was incorporated for research purposes only. It was decided that NUCCA should publish a more scientifically-oriented paper and the name NUCCA News was changed to The Monograph, meaning: learned treatise on a particular subject. Since then, the accomplishments of NUCCA and NUCCRA have been numerous and include: (1) The development of the double-pivot-point system in x-ray analysis; (2) The development of the triceps pull adjustment; (3) The design of improved film analytical instruments; (4) The development of biomechanical concepts in film analysis and adjusting; (5) The design and development of the Anatometer by Dr. Gregory and Peter Benesh, an instrument which measures bodily distortions before and after the C-1 adjustment, providing proof of the effects of a C-1 subluxation; (6) The design and development of a multiple support headpiece for extreme subluxations; (7) The establishment of a vertical axis for C-1 subluxations; (8) The classification of C-1 subluxations into basic types; (9) The location of the skull center of gravity; (10) The identification of the components of the lever system and their relationship inherent in an Occipital-Atlanto-Axial subluxation. NUCCA has provided the chiropractic profession with more biomechanical data than any other chiropractic entity concerning the atlas subluxation, its effects on the spinal column and human body, how to restore its misalignments to the vertical axis, and has shown acceptable and measurable proof of the benefits of the chiropractic adjustment on the human body.